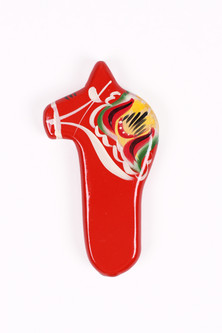 Quick, what’s the first thing that comes to mind when you think of Sweden? That’s right, it’s the Dala Horse. The opener is hand-painted in the traditional style; the impeccable attention to detail makes every opener unique.

Red-painted wooden horses have become a global symbol of Sweden. But have you ever stopped to wonder why? If you do a Google search for "symbol of Sweden", you'll see a bunch of gold crowns on a blue background, a few flags, maybe some peace signs... and plenty of red wooden horses. The Dala horse (Dalahäst) is undeniably an international symbol for the country – but it hasn't always been that way. “The Dala horse first became famous at the World Fair in New York in 1939,” Lennart Ihren, Head of production at Nils Olsson Hemslöjd told The Local Brands.